As noted earlier tonight, New Japan Pro Wrestling and All Elite Wrestling will join forces for a supershow later this Summer. It will take place on June 26 at the United Center in Chicago and will be called, “Forbidden Door”.

All Elite Wrestling and New Japan Pro Wrestling have now issued a press release for the event, as you can see below. It is noted in the release that tickets for the “historic PPV event” go on sale on Friday, May 6, at 11 am EST.

— Live from the United Center in Chicago on Sunday, June 26, this landmark PPVrepresents the next step in professional wrestling’s revolution —

April 20, 2022 — Moments ago on AEW: Dynamite live on TBS, the hinges were fully ripped off the Forbidden Door, as it was announced that AEW and New Japan Pro Wrestling will present their first-ever joint pay-per-view special this summer. “AEW x NJPW: Forbidden Door” will take place live on Sunday, June 26, at the United Center in Chicago, featuring marquee matchups between members of AEW and NJPW’s world-class rosters. Tickets for the historic PPV event go on sale on Friday, May 6, at 11 am ET/10 am CT at AEWTix.com and Ticketmaster.com. Fans in the United States and Canada can watch the PPVvia purchase on the Bleacher Report app or via their local Cable or Satellite provider. The program will be available with both English and Spanish commentary. The PPV will be available in international markets on FITE.tv. Fans in Japan can watch on iPPV on NJPWWorld.com withlive Japanese commentary.“As the world continues to reopen, I’m making sure the Forbidden Door follows suit and we can finally give fans the dream events they’ve always imagined,” said Tony Khan, CEO, GM and head of Creative of AEW. “The United Center was home to one of AEW’s biggest events of all-time, The First Dance, where CM Punk made his return to wrestling after a seven-year hiatus.

This summer, fans of AEW and NJPW can expect the unexpected during this extraordinary, first-of-its-kind pay-per-view between our two incredible companies.”

“As we have done for more than 50 years, the power of pro-wrestling can energize people by fulfilling their dreams,” said Takami Ohbari, President of NJPW. “Now, it’s quite an important mission for us, the pro-wrestling industry as a whole. We are not only opening this door. We will show you NJPW’s genuine Strong-Style beyond the Forbidden door.”This announcement furthers the opening of the Forbidden Door, coming just over a month after Tony Khan announced that he agreed to acquire the assets of Ring of Honor, and less than three Weeks after he produced the ROH Supercard of Honor pay-per-view in Dallas, featuring a number of major title changes and ROH alumni appearances including Samoa Joe, The YoungBucks, Wheeler Yuta, Jay Lethal, Lee Moriarty, Matt Sydal, Sonjay Dutt, and Mercedes Martinez.

About New Japan Pro WrestlingFounded in 1972, New Japan Pro-Wrestling is the world’s premier professional wrestling organization. Proudly carrying the branding of ‘King of Sports’, stars like Hiroshi Tanahashi, Tetsuya Naito, Will Ospreay, Jay White, and more bring fans worldwide the absolute best in-ring action worldwide. With a 50-year legacy stretching from Antonio Inoki through Tiger Mask and Jushin Thunder Liger to Kazuchika Okada, NJPW is renowned for its strong style influence on the pro-wrestling landscape. Based in Tokyo, NJPW operates its US business from Los Angeles, California.”

An AEW/New Japan Supershow is just the latest step in the partnership between the two sides, which began in February of 2021 with some NJPW stars appearing on AEW programming. Since then, talents from both sides have worked together on New Japan Strong, AEW Dynamite, Rampage, and other shows from both organizations.

Follow our full live coverage of AEW Dynamite at this link! 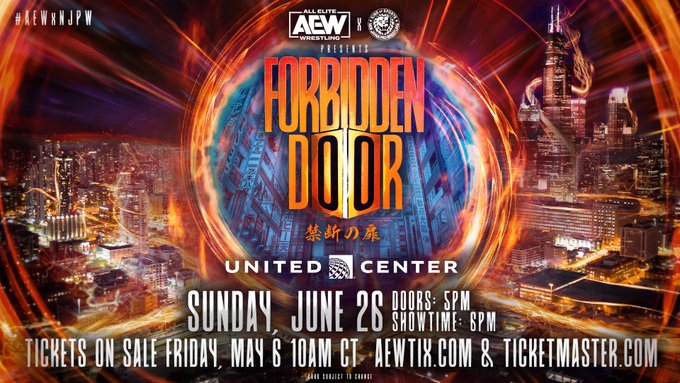