By Scott Gilfoid: It’s now official with Conor Benn defending his WBA Continental welterweight strap against Chris van Heerden on April 16th in the main event live on DAZN at the AO Arena in Manchester, England.

Promoter Eddie Hearn wasn’t joshing about his desire to match Benn against the 34-year-old van Heerden despite the heavy criticism he’d received from fans about their lack of interest in seeing this fight.

Fans wanted to see Benn take a step up in class against David Avanesyan or Kell Brook, who were interested in fighting him.

Brook priced himself out, asking for what is believed to be $10 million for the fight with Benn. If that figure is correct, there was no way a Brook-Benn battle could be made.

Benn is looking to make a statement

The unbeaten welterweight contender/prospect Benn (20-0, 13 KOs) will be looking to score another stoppage over an old veteran in van Heerden, who has been around the block a couple of times in fights against Errol Spence Jr. and Jaron ‘Boots’ Ennis.

Those are the only notable names on van Heerden’s 16-year professional record, and he did NOT look good in either of those matches.

In van Heerden’s fight with Ennis, he wasn’t competitive at the least before the match was halted after the first round because of a cut the South African suffered.

That fight was such a mismatch that it was painful to watch because van Heerden was running from one side of the ring to the other, taking withering fire from Boots Ennis while on the run.

“I’m excited to step into the ring with Chris Van Heerden,” Benn said to Matchroom Boxing. “Van Heerden is a tough operator and a southpaw who will be in there giving it his all in every round.

“For me and my team, it’s now about fighting every style that we can face as we continue to head towards World Championship status.”

Let me be the first to say that if Benn is serious about wanting to fight for a world title soon, he really should be fighting better opposition than Chris van Heerden.

Unfortunately, Ugas is fighting Spence in an unification fight on April 16th, and the odds of the Cuban talent holding onto his WBA strap are slim and none. It would be a good idea for Benn to stop wasting his breath talking about his desire to fight Ugas because he’s about to become obsolete.

Interaction, if Benn can beat van Heerden more quickly than Spence did seven years ago with his eighth-round knockout in 2015, he can brag to the boxing public about doing a better job.

Of course, Benn would be leaving out the inconvenient fact that van Heerden was a lot younger when he fought Spence at the age of 27 than now at 34 and coming off a 2 1/2 year layoff. What the fans don’t know won’t hurt them.

Conor is coming off a win over Algieri

In Benn’s last fight, he obliterated boxing commentator Chris Algieri by a fourth-round knockout last December in Liverpool, England. The 37-year-old Algieri was a former WBO 140-lb champion from 2014 when he pulled off a miracle upset over then-champion Ruslan Provodnikov. 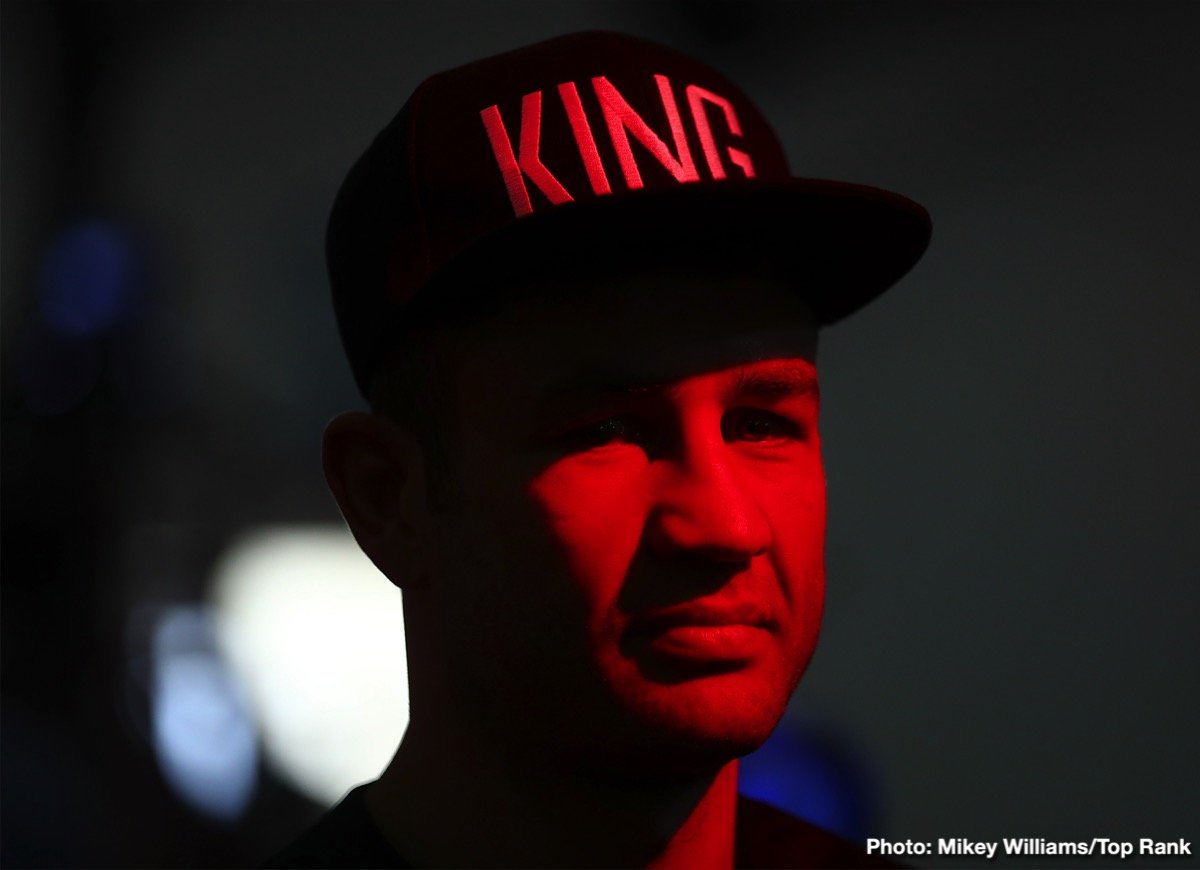 But as quickly as Algieri captured the WBO strap, his career was immediately extinguished with crushing defeats against Manny Pacquiao, Errol Spence Jr., and Amir Khan. Benn was able to stop Algieri slightly faster than Spence did in 2016, giving him room to brag about his win.

We’re heading back to Manchester! 👊

“This is another stepping stone for me on my journey to the top, I haven’t seen anything in Van Heerden’s previous fights that I can’t deal with, and I expect another explosive victory on April 16,” Benn said. “If he comes to fight or he wants to box, I can deliver that smoke either way.”

The 34-year-old van Heerden’s best victories have come against these fighters:

If you’ll notice, those victories for van Heerden came a decade ago when he was a lot younger, and his career was humming along.

Things haven’t been great for van Heerden lately, as he’s been inactive, and he hasn’t beaten anyone of note since those three fights.

That’s why it seems a little odd that Hearn has selected van Heerden for Benn to fight because he’s not fighting a relevant welterweight with this match.

In terms of quality, Van Heerden is arguably a step down from Benn’s last two opponents, Algieri and Adrian Granados, and that’s not the direction you want to see him going in. I mean, if the idea is to have Conor challenge for a world title in 2023 or 2024, it’s pointless to have him fight an old lion like van Heerden.

If Benn intends to improve enough to defeat IBF/WBC welterweight champion Errol Spence Jr. or WBO champion Terence Crawford, he needs to be fighting these types of fighters:

Benn can’t hope to be ready to face a talent like Spence or Crawford for a world title without fighting any of those guys.

“Conor Benn is fast becoming one of the biggest stars in British Boxing, and he faces by far the toughest test of his career to date when he takes on Chris Van Heerden in Manchester on April 16,” Hearn said.

“I expect a grueling battle for Conor. I expect another blistering statement from Conor Benn live worldwide on DAZN,” said Hearn.

If this fight does turn out to be a “grueling battle” for Benn, as Hearn predicts, then he’s going to need to think seriously about reconsidering his plans for having him challenge for a world title in 2023.

That would be a horrible idea for Benn to fight for a world title if he’s struggling to beat a fighter like Van Heerden.

Fans would argue that Van Heerden isn’t the most challenging fight to date for the 25-year-old Conor Benn. It’s fair to say that the most formidable opponent that Benn has fought up to this date is Cedrick Peynaud, who came close to beating him in their first fight in December 2017.