AEW stars FTR, who are the current AAA World Tag Team Champions, took to social media this week to announce that they will be taking a number of select indie bookings moving forward.

Dax Harwood posted the statement to Twitter, noting how all he and Cash Wheeler have wanted to do is wrestle, but “JUST” wrestling isn’t enough. He also talked about the legacy they want to leave, and said at the end of the day, when it’s all over, they want their fans to proudly be able to say FTR was the best.

Harwood noted that they have one agent handling their match bookings, and he will work separate from their agent who handles appearance bookings. FTR will work closely with that agent and specific promoters to pick the best tag teams to wrestle, so they can put on the best matches for fans. Promoters can inquire about bookings via [email protected]

You can read the full FTR statement below.

Besides working for AAA, FTR has worked one indie date since signing with AEW in May 2020, and that was their win over WWE Hall of Famers The Rock ‘n’ Roll Express at a Big Time Wrestling event on January 22 of this year, which was the first match on the farewell tour for Ricky Morton and Robert Gibson.

FTR worked the recent Tag Team Battle Royale and Casino Tag Team Royale bots on AEW Dynamite to try and earn a spot in the Triple Threat for the AEW World Tag Team Titles at Sunday’s AEW Revolution pay-per-view, but they came up short and did not appear at the pay-per-view. They also lost to CM Punk and Jon Moxley on the February 9 Dynamite, but defeated Brock Anderson and Lee Johnson on the January 28 edition of AEW Rampage.

Dax’s announcement on indie dates comes after he made comments ahead of the Triple Threat at AEW Revolution, writing, “We’re the only AEW, AAA, NXT (2x), WWE RAW (2x), and WWE Smackdown tag team champions in the history of professional wrestling. We’re also the best tag team of our generation. Young Bucks knows that. Red Dragon knows that. Jurassic Express knows that. Tony Khan knows that.”

A social media back & forth between FTR and ROH World Tag Team Champions The Briscoes has gone on for a few months now, and it will be interesting to see if this announcement or the ROH sale leads to that match happening.

Stay tuned for more on FTR. You can read Harwood’s full announcement below, along with the related tweets:

“All Cash and myself have ever wanted to do is wrestle; but just wrestling isn’t enough. We’ve talked on countless interviews about how important leaving a legacy is to the two of us. When speaking of ‘legacy’, it’s not just a buzz word; we absolutely mean it. To leave that legacy, and to prove we’re what all of our heroes and peers say, we have to wrestle the best teams in the world. At the end of the day, when it’s all over, we want all of our fans to proudly be able to say ‘FTR was the best.’

In saying that, we’ve decided to take a select few independent bookings. Our agent handling our wrestling match bookings will be completely separate from our agent who handles our appearance bookings. We will work closely with that agent and the specific promoter to pick the best teams to wrestle, so we can put on the best matches for the fans.

We LOVE wrestling and we’re extremely excited about the match possibilities we can have in the future. Cash & I hope we can continue to build on the legacy we’ve carved out for ourselves. 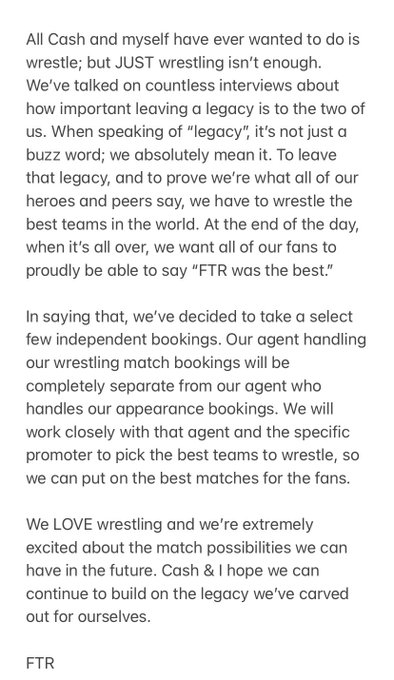