Welcome to our WrestlingINC.com Live Impact Wrestling Viewing Party. Our live coverage starts at 8pm ET. Please share coverage of tonight’s Viewing Party on social media and chime in with your thoughts in the Comments section below.

Here is what’s in store for tonight: 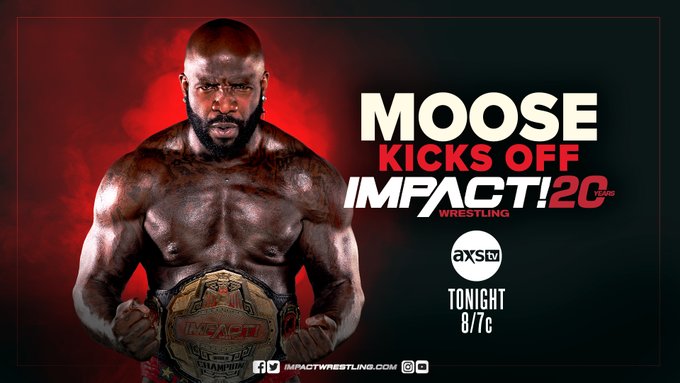 Impact World Champion Moose kicks off the show fresh off his No Surrender win. He says he’s proved why he’s the greatest world champion in wrestling month after month. Moose says at No Surrender he did it again. He tells the crowd he stepped in the ring with a titan and put him down. However, all anyone’s talking about is Eddie Edwards.

Moose claims there’s only one man in pro wrestling that needs to be acknwloedge, and it’s him. Moose says without him there wouldn’t be an Eddie Edwards. He says when you step into the ring with him, he changes your world forever.

Before Moose can say much more, he’s interrupted by Heath. He asks if Moose thinks this is a joke. Heath says Eddie Edwards is a big part of Impact, and everyone loves him. Heath believes they’re at war in Impact. The crowd cheers Heath after he questions Moose as a champion. Heath says he busted his ass to get to Impact. He claims despite being out for a whole year, Impact stuck by him.

Moose asks where Heath was when Honor No More was causing chaos. Heath questions if Moose has heard of the COVID-19 protocols. He says now that he’s negative and Moose is done with Morrisey, he’s been wanting a piece of Moose. Moose is World Champion now, so he can become the champion that fights for the company.

Moose wonders if that’s really what Heath wants. He doesn’t think Heath wants to go down that same downward spiral. He says he doesn’t care about Honor No More, Impact Wrestling, or anyone in the back including Heath’s kids. The two men exchange blows and Heath drops Moose with the Wake Up Call.

Backstage Scott D’Amore tells Rhino he can have Eddie Edwards one on one at Sacrifice. 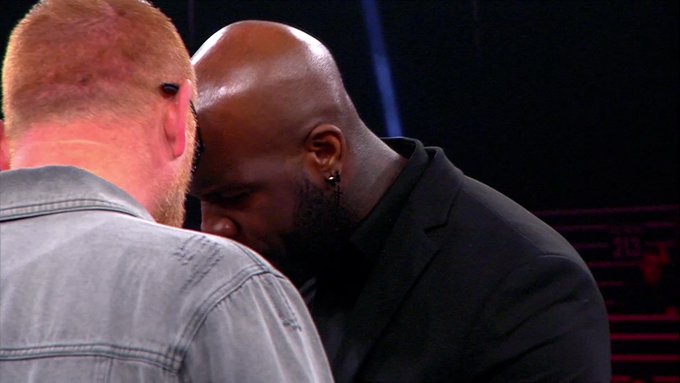 After the commercial, Honor No More shows up backstage, and they’re late to the event. D’Amore tells them it’s hands-off against them until the six-man tag tonight. D’Amore wonders where Eddie Edwards is, but they tell him he’s coming on his own time. Moose shows up and tells the group he doesn’t have an issue with any of them but warns them not to get in his way. He tells them not to come after his World Championship, or there will be problems.

D’Amore asks Moose what the hell’s happened to him because he doesn’t have a problem with Eddie’s actions. D’Amore asks if maybe Moose is the joke and announces Moose vs Heath for the title at Sacrifice.

Grace knocks Cardona right away with a hard shot from the DVD players. Grace rams Cardona back first into the apron. Cardona escapes and gets back into the ring. With Grace on the mat, Cardona lands a few strikes. Grace gets control and knocks Cardona down with a shoulder tackle.

Grace throws Cardona to the outside. She dives through the ropes to wipe out Cardona with a suicide dive. Grace pulls out a trash can full of computer accessories including multiple keyboards. After the commercial, Cardona’s back in control and stomping Grace in the corner. He pulls her to the center of the ring and gets a two-count.

Cardona takes possession of the keyboard and blasts Grace in the back. With the computer cord in his hand, Cardona uses it to choke Grace before slamming her into the matt. He goes for another cover, but Grace kicks out yet again. Cardona levels Grace with a neck breaker in the center of the ring. However, it’s still not enough to secure the victory.

On the outside, Cardona procures a steel chair to use against Grace. He hits her in the gut when she stands up. Grace takes control and throws Cardona rib first into the setup steel chair. She grabs the keyboard and gives Cardona a taste of his own medicine. Grace takes a selfie stick and lands a series of shots onto Cardona. Grace hits Cardona with a back suplex to further the punishment.

With Cardona face first into the turnbuckle, Grace hits him with knees to the back of the head. Grace bounces off the top rope for a version of the Vader bomb, but it doesn’t beat him. Grace reveals a black bag full of something which turns out to be cell phones. Before she can slam Cardona into the phones, he regains control. He wraps a cord around his first, but she powerbombs him into the pile of cell phones. She races to the cover, but Cardona kicks out.

Grace tries to drop Cardona with a low blow, but he’s wearing a cup. He kicks her in the face and shoves the cup in her face. While he’s taunting with it, she’s able to hit an actual low-blow on Cardona. Grace uses the cup to smother Cardona’s face with it. Cardona regains momentum and throws Grace into a corner steel chair. With his feet on the ropes, he rolls her up for the win. 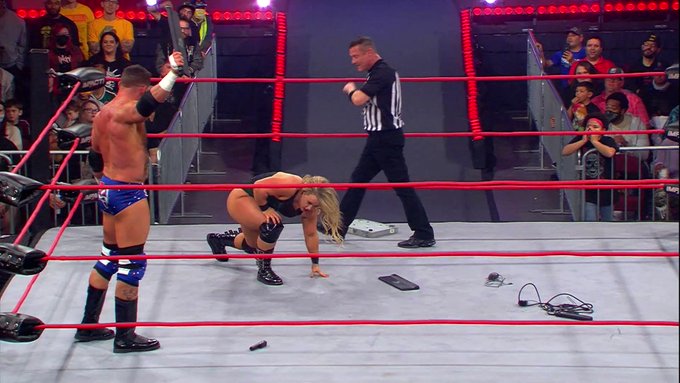 Skyler immediately hits Gujjar in the gut, but Gujjar easily takes control. Gujjar drops Skyler with three power moves before climbing to the top rope. Skyler rolls out of harm’s way before Gujjar can dive. Skyler rams Gujjar shoulder first into the post. With Gujjar on the ground, Skyler kicks lands multiple strikes to his fallen body.

Skyler attempts a submission maneuver, but Gujjar gets to his feet. Gujjar’s fired up and takes Skyler down with a sling blade. Gujjar stuns Skyler with a ripcord knee strike, followed by a spinebuster to the matt. It’s not enough to put him away though.

Skyler’s back up and starts working on Gujjar’s injured him. He’s picking it apart. Skyler attempts a top turnbuckle suplex, but Gujjar frees himself. Gujjar floors Skyler with a spear from the corner to pick up the victory. 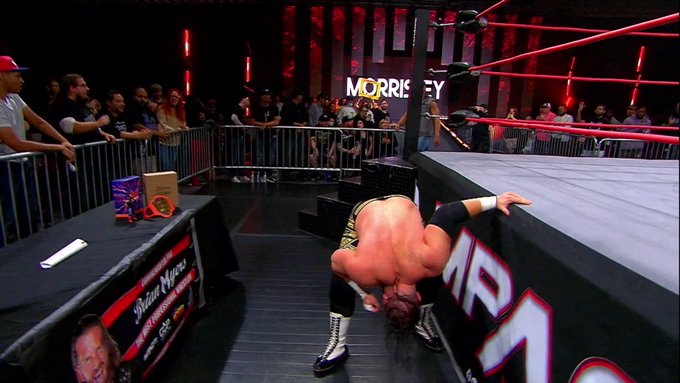 Lady Frost answers Purrazzo’s open challenge and chooses to go after the AAA Reina de Reinas Championship. The crowd’s split down the middle between both women. Frost takes control early on, but she’s caught into a side headlock by Purrazzo. Purrazzo drops Frost to the mat to grind in the submission. Frost escapes the submission and takes down Purrazzo and completes a series of handstands.

With Frost in the corner, Purrazo smashes her into the canvas. Purrazzo starts working over Frost’s legs, but Frost escapes. With Purrazzo stunned, Frost delivers a standing moonsault off the apron into Purrazzo. Frost attempts a pinfall, but The Virtuosa kicks out. Frost tries to do a high-risk move, but Purrazzo hits her with the chop block.

She locks Frost in a Boston Crab, but Frost grabs the rope. Purrazzo takes full advantage of the ref’s count. Purrazzo hooks both of Frost’s arms for the submission victory. 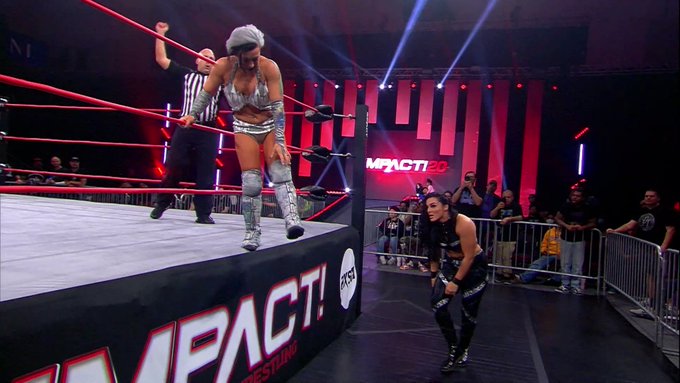 Dice hits Jonah with a flurry of strikes right out of the gate. He hits Jonah with a chop block, but Jonah easily takes him down. Jonah drops Dice to the matt with a thunderous suplex and follows it up with a big splash. Jonah sets Dice up for a powerbomb, and that’s enough to win in a decisive fashion. 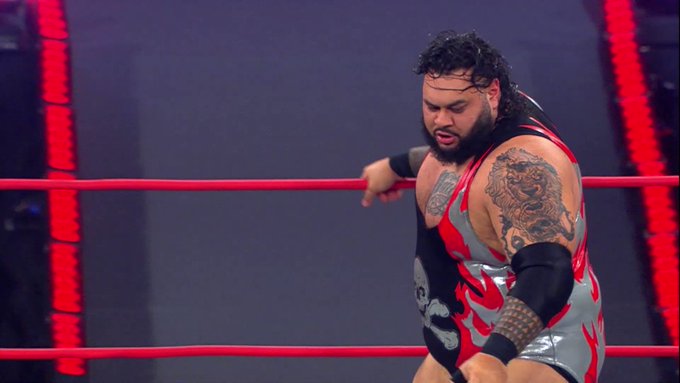 A fight breaks out between all of the competitors at the beginning of the bout. Things are breaking down quickly Honor No More trades shots on Swann, but Sabin makes the save. Team Impact trades their own series of shots on King. Mack & Swann hold King while Sabin hits a running kick to the face.

King tags in Bennett, who gets chopped by Sabin. Bennett tags in Taven and they try to take out Savin. Sabin gives a running kick on the apron to Bennett. Sabin tries to throw Bennett back in the ring but gets a forearm to the face. Taven & Sabin are legal, however, Taven can’t secure the victory.

Taven tags in King who immediately goes to work on Sabin. King goes for the ground and pound on Sabin. Honor No More has isolated Sabin from his team for several minutes. Sabin connects a drop toe hold on Bennett and lands him into Taven’s nether regions.

Swann’s tagged in and delivers kicks in the corner to both Bennett & Taven. Swann tags in Mack, and they hit Taven with a double team. Mack drives Taven into the mat with a Samona drop and a standing moonsault. Mack is tearing through Honor No More, but King takes out Sabin & Swann.

Bennett & Taven use that moment to wipe out Mack and secure the pinfall victor. Honor No More defeats Team Impact once again. 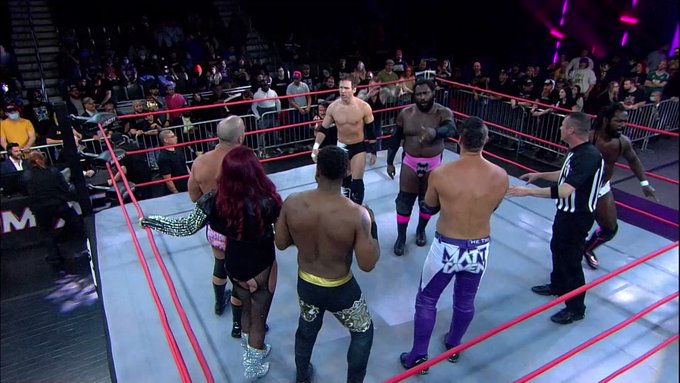 Eddie Edwards comes to the ring after the match and admits he sees everyone feels betrayed. He says fans are right to feel that way. He says they’re wrong to blame him. Eddie says he’s known Honor No More for a long time, but that’s not why he joined them.

Eddie says he felt betrayed when Ring Of Honor announced their hiatus. Again, he says that’s not why he joined Honor No More. He claims Honor No More has their own issues and their own problems. He ways they identified the cancerous dishonor within the industry, and he stands with him to expose it.

Eddie says two years ago, everything changed. Nobody would know who was going to show up in Impact Wrestling. He had faith that Impact Wrestling would do what was best for the company. He says he had the same faith in them when Kenny Omega challenged for Impact Title. However, Richard Swann failed and caused them to lose the title.

Eddie believes it was that moment that made him realize Impact Wrestling had zero faith in him. He doesn’t want to hear from the fans now. When asked why he did it, he says, he gave everything to the company and got nothing in return. Two years ago he wouldn’t have believed it.

Alisha Edwards comes out and decides to keep everything public. She can’t believe what Eddie’s doing. She thinks he should be asking for forgiveness from everyone. He says she saw him never get his shot. She admits she say that, but she reminds him that he had faith before.

She knows he wanted to bring the title back to Impact, but it was Josh Alexander who brought it. Alisha says Josh did all of that, but Eddie needs to stop bitching and celebrate with his real family. He tells her to take a look because Honor No More is his family now. Eddie says it’s up to her if she’s still his family. He leaves with No More Honor to close the show.