Welcome to our WrestlingINC.com Live Impact Wrestling Viewing Party. Our live coverage starts at 8pm ET. Please share coverage of tonight’s Viewing Party on social media and chime in with your thoughts in the Comments section below.

Here is what’s in store for tonight:

Who will challenge Mickie James for the Knockouts World Title at Sacrifice? That question will be answered this Thursday when @ImChelseaGreen battles @RealTSteelz in a highly-anticipated #1 Contenders match tonight on #IMPACTonAXSTV! https://t.co/KkN2wjWVA8 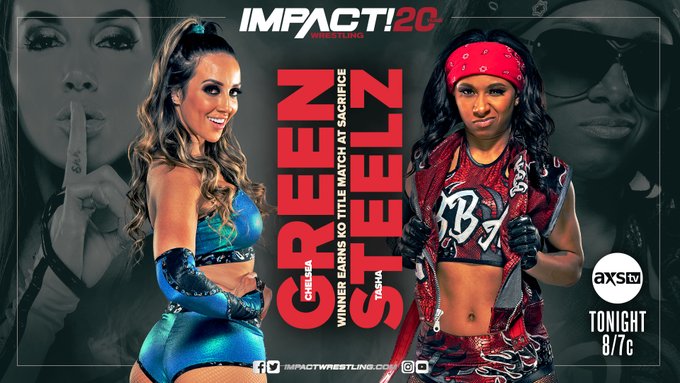 Edwards meets Maclin on the outside of the ring to kick off the action. Edwards delivers chops sending Maclin into the steel barrier. He reverses an Irish whip from Maclin, only to find himself on the receiving end of a Maclin clothesline.

Maclin rolls Edwards into the ring, and the match is officially underway. Maclin hits Edwards with strikes in the ring, but Edwards sends Maclin to the outside. Edwards drops Maclin with a boot to the face, but he can’t capitalize. With Edwards outside the ring, Maclyn delivers a thunderous suicide dive to level Edwards.

Back in the ring, the men go nose to nose, trading chops. Edwards hits a spinning sit-down powerbomb onto Maclin. With Maclin in the corner, Edwards lands more chops to Maclin’s chest. Maclin tries to fight back, but Edwards’ strikes are too much to withstand.

Maclin writhes on the mat in pain until Edwards puts him back into the corner. Edwards hits Maclin with more chops to his (now very red) chest. Maclin’s unphased by the new series of chops and tries to fight back. Both men collide with standing crossbodies. Both Edwards and Maclin are down.

Back to their feet, Edwards and Maclin trade right hands and forearms. Things devolve into a slugfest until Edwards gets the better. Out of nowhere, Maclin lands a backbreaker and sends Edwards chest first into the turnbuckle. Maclin follows it up with an Olympic Slam and heads to the top rope.

Edwards charges the corner and hits a big boot to Maclin’s face. With Maclin dazed and confused, Edwards sets him up for a power move but loses his balance. With Edwards in the tree of woe, Maclin’s able to hit him with a running strike. On the outside, Maclin drives Edwards into the ring apron and lands a diving elbow to the outside. Edwards smashes Maclin with a kendo stick to bring this match to a DQ finish. 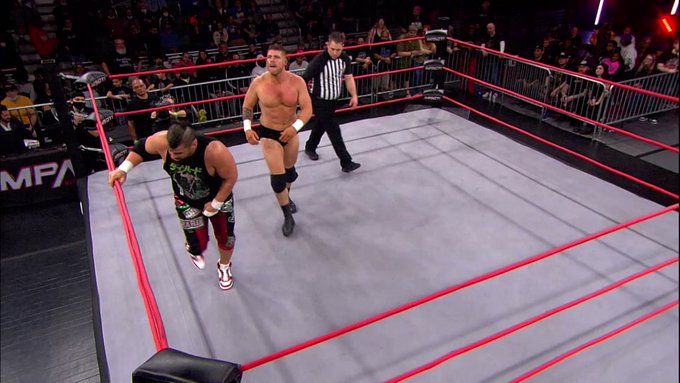 After the match, Honor No More and Team Impact trade insults leading to a new bout between Heath and Vincent. This match is official. Both teams are trying to gain the upper hand before their respective boots at Impact Wrestling’s Sacrifice.

The two men lock up, and Heath sends Vincent into the corner. They break, and Vincent tries to intimidate Heath. The lock-up again, and Heath puts Vincent into a side headlock, followed by a shoulder tackle. They lock up for the third time, but this time Vincent hits Heath with a back elbow.

Heath’s stunned on the ropes, and Vincent’s in control. Vincent kicks Heath in the mid-section. Heath regains control and hits Vincent with multiple strikes in the corner. He follows up the strikes by bashing Vincent’s skull into the top turnbuckle. Heath is all over Vincent at this stage in the match.

Vincent picks up the pace and drops Heath with a running clothesline. Vincent puts Heath in the corner and delivers a duo of uppercuts. He executes a spinning neck breaker, but it’s not enough to pin Heath for the three count. Heath battles back and hits an inverted atomic drop. Heath delivers a running kick to Vincent’s back which secures him a two-count.

He brings Vincent to his feet and knocks him down with a hard punch. Heath runs off the ropes but gets stopped by Taven. Honor No More takes control as this match goes to a commercial break.

After the break, Vincent hits hit with a side Russian leg sweep. He’s only able to get a two-count on Heath. Vincent tries to suplex Heath, but Heath rams him into the corner. Vincent goes up top and leaps to lock Heath into a guillotine. Heath battles out of it and drops Vincent with a big suplex.

Heath hits Vincent with hard strikes to the face and lands a clotheline. He lands his knees to Vincent’s chest, but Vincent knocks him to the mat. Vincent delivers an insane Red Rum off the top rope onto Heath. He’s only able to get a two-count. Vincent attempts a second side Russian leg sweep, but he walks into a Wake Up Call instead. It’s enough for Heath to land the pinfall victory over Vincent.

After the match, Moose appears and misses Heath and hits a splash onto Taven. Heath levels Moose with a Wake Up Call which could be a preview of what’s to come at Impact Wrestling’s Sacrifice show this weekend. 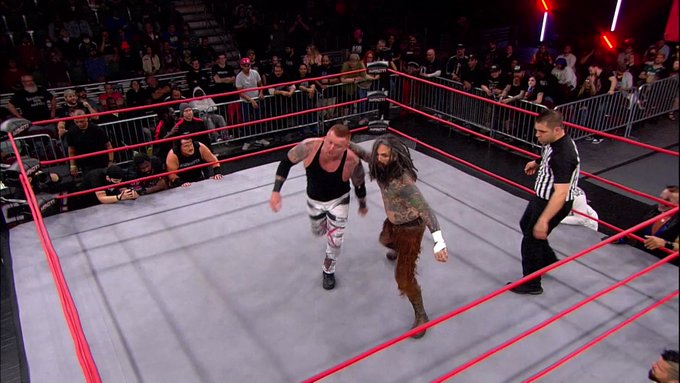 Masha slams Rose into the corner and hits thunderous strikes. Rose tries to counter and hits a knee to the face, but Masha’s knee is more powerful. Masha drops Rose with a modified piledriver move. Masha hits her finisher for the win. Another fast match sending Masha to 5-0 in Impact Wrestling. 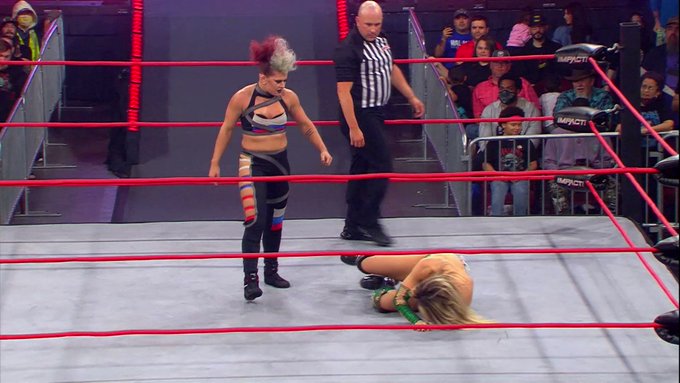 Rayne blindsided Cassie with an attack at the start off the match. Rayne puts her foot to Cassie’s neck in the corner. Rayne’s fully in control as she mocks Cassie. Rayne rolls out of the ring after losing control of the match.

Cassie brings Rayne back into the match, but Rayne smashes her face off the turnbuckle. Rayne drops Cassie with an expertly nailed Northern Lights Suplex. Rayne locks in a headlock, but Cassie won’t tap. Cassie makes it back to her feet and breaks free.

Rayne tries to charge after Cassie, but she misses each time. She takes over the momentum of the match and hits Rayne with a series of stomps in the corner. Cassie kicks Rayne in the face off the apron sending her into the floor below.

Cassie tosses Rayne back into the match, but Dashwood rams Cassie into the ring apron. Back in the ring Cassie his a kick and the Inspiral for the win. The champs have the momentum heading into Impact Wrestling’s Sacrifice this Saturday. 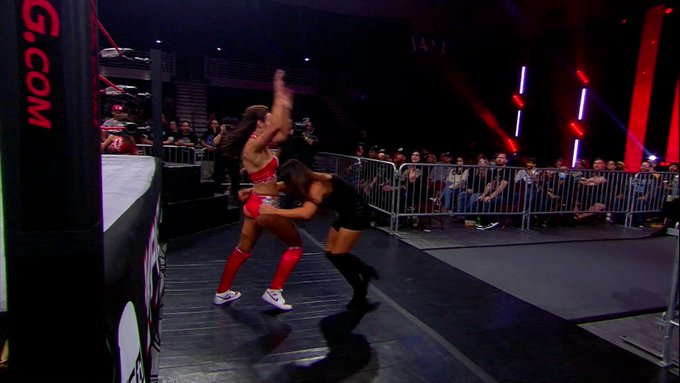 Steelz drops Green right away and hits her with a headbutt. Steelz runs with a back elbow onto Green into the corner. Green slips away for the quick cover followed by a kick to the face.

Steelz takes down Green and hits her with another headbutt; this time to the spine. Steelz stomps Green in the stomach in the corner and sends her across the ring. Green tries to take control, but a back elbow from Steelz levels her. Steelz hits Green with double ax handles to her back. She’s working over Green’s back and arm.

Steelz lands another headbutt, sending Green into the corner. Green tries to pull herself off, but Steelz headbutts are proving to be too much. Steelz lifts Green and hits her with a jab to the jaw. Green bounces back and hits her own back elbow. Green throws Steelz over the top rope which is enough for Steelz to recalibrate and regain control.

Both women run into one another and fall to the mat at the same time. This is now the third time we’ve seen a spot like this tonight. The ref begins his count, but Steelz makes it to her feet and misses a kick attempt. Green sends Steelz chest first into the turnbuckle and lands a backstabber. Green takes her foot and rams Steelz into the corner. She goes for the cover, but Steelz kicks out.

Green drives Steelz face-first into the mat, but Steelz says in it! Steelz kicks Green in the stomach and lands a bulldog, but again, it’s not enough for the win. Steelz throws Green to the outside which is an opening for Savannah Evans to get involved and hit a big boot. Mickie James wants to intervene to help, but she promises Green she wouldn’t get involved. Green is rolled back into the ring, and Steelz hits a top rope frog splash for the winner. This one is over. 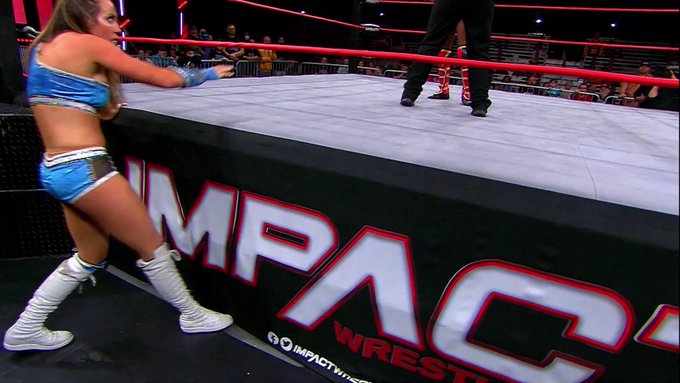 Swinger rakes Jonah’s eyes at the start of the match. He attempts a side Russian leg sweep, but he fails. Jonah drops him to the mat and lands a splash to the ribs. Jonah climbs to the top and crushes Swinger with a Tsunami. That’s it, folks.

After the match, PCO arrives at the top of the ramp. They’re facing one another at Impact Wrestling’s Sacrifice, but things might get physical now. The men stand face to face before Jonah knocks him to the ground. Jonah sets up the Tsunami and drives all 300 lbs of himself into PCO. PCO sits up and delivers a clothesline to Jonah sending him to the outside. 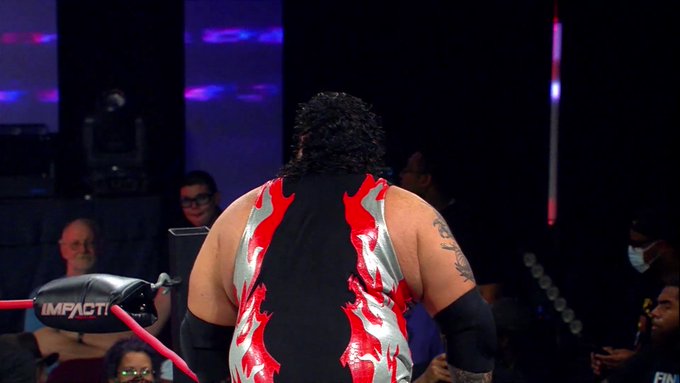 Bullet Club vs VBD and GOD

The main event of Impact Wrestling has a lot of Sacrifice implications. Everyone in action is competing this Saturday, so the winning team will leave with lots of momentum. Everything explodes out of the gate in this match. Jay White ends up in the ring alone for a moment with Tonga and Loa. However, everyone else storms the ring and breaks it up.

Security rushes to ringside trying to separate everyone. Nothing they do is working because the men are ready to fight and tear each other apart. Scott D’Amore changes the bout to a no disqualification match because of the chaos. Everything is legal. Nothing is off-limits.

The Good Brothers target Tonga and Loa after the commercial break. Tonga is out for blood against Good Brothers. In the ring, Doering tries to take down White. However, White hits him with a series of chops and shoulder tackles. It’s not enough to take the big man off his feet. Doering hits a massive shoulder tackle of his own taking him out.

Deaner brings a trash can into the ring and sets it up in the corner. Deaner grabs Bey, but Bey gets out and avoids the trash can. Bey grabs the trash can and places Deaner inside and hits a double stomp.

White wraps a steel chain around Doering’s neck on the outside. Doering flips White off of his back and throws him into the trash can. Back in the ring, White shifts his focus to Deaner, but Doering makes his way into the ring taking out White. Gallows tries to help his team, but GOD wipes him out with a trash can.

Chris Bey is also halted with a huge spear by Loa. Good Brothers and GOD battle to the outside and into the backstage area. The only two men left standing are White and Doering. Doering takes down white and sets up the headbutt by Deaner. Bey makes the save and breaks up the pinfall attempt.

Doering accidentally throws himself shoulder-first into a door. White takes advantage of a fallen Deaner and his Blade Runner onto a chair for the win. Bullet Club stands tall heading into Impact Wrestling’s Sacrifice PPV. 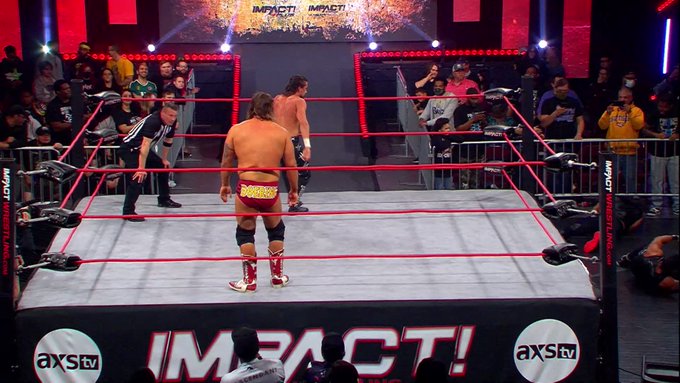