According to Rennie, Bully never apologized to her or to Moxley about the “bull** that trash takes.”

“The whole thing, Bully Ray thing, you know, I saw it all over my Twitter and I was like ‘Do you even address this? ‘But it’s like this thing you know, people can talk about me all day long and whatever, it’s okay,’ started Renee.

“You don’t talk about my husband, you don’t talk about my family, it just gets more special to me and annoys me more. It also annoys me because Bully is the person I’ve always really enjoyed. I’ve always really liked Bully. I’ve always thought I was in a good relationship with him though Others don’t have a good relationship with him or they have burned bridges elsewhere and left a bad taste in other people’s mouths. I didn’t have that situation with him so now to be on the receiving end of him, it sucks. I haven’t spoken to him since everything fell. He definitely has my number He definitely has my husband’s phone number.”

Renee recalled how Moxley made a surprising appearance at last Friday’s Northeast Wrestling event, where Bully was in a tag team match that also features Adam Scherr, Erick Redbeard and nZo.

“But like [Dave] Lajrica said he was out of Northeast Wrestling over the weekend. I know Billy was with him [but didn’t apologize to Jon]. “

And Renee continued, “Yeah, I mean, that’s bad. So just for the sake of context for anyone who doesn’t know… Bully said he thought John had to apologize to the audience and apologise.” [Bully said] Not necessarily apologizing to the boys in the back and the girls in the back for the time it was off but the people who bought tickets and wanted to see Jon Moxley and such and such and such. There can be no more trash.

“Honestly, my first reaction to that was like, ‘I just thought it was like some sudden shock and I was like ‘He doesn’t actually think that’. There is no way he actually believes that John needs to apologize for taking time off to better himself. By the way, three months is also not within the scope of what wrestling is, and also within the scope of his life. Three months is nothing for that for him to go and do the things he needs to do for himself, for our family and for our daughter, and that’s for us. It is not for anyone else. I couldn’t be more proud of him for doing this for a company known for its addiction issues.

“We’ve seen the untimely deaths of a lot of wrestlers. It’s been something that has affected the business for a long time. It’s the stigma that comes with work, so the fact that John is one of those guys where he’s at, he goes against the tide and does the things that He needs to do it, I think he talks a lot about the fans, not even just the fans [but] People inside work, to the other boys in the back [and] For the girls in the back who might be going through something similar. It happens to many people. It is unfortunately very common. So he went for what he had to do and didn’t apologize.”

When asked by co-host Misha Tate if Bully and Moxley could eventually make a match, Renee confirmed Bully’s comments wouldn’t lead to a story.

“There is no payoff … this is not a corner,” stressed Rene. “They’re not going to get rewarded like a match or anything like that… It seems like it’s really hard.”

Renee added that John had no idea what Polly had said until I mentioned it to him, “And honestly, John didn’t even know about this until I told him something at 10 p.m. That day, like he had no idea what was going on.”

On Sunday night, a loud “f**k Bully Ray” song broke out at the start of Jon Moxley’s match with Homicide at WRLD on World Cryosphere Watch Pay per view. As seen below, Bully addressed the cheers via Twitter.

H/T to WrestlingNews.co for copying.

I knew my loyal GCW fans in New York City would never let me down. Especially in my building. Music on my ears!! 🔥🔥🔥 #FuckBullyRay https://t.co/dugMANzg4v 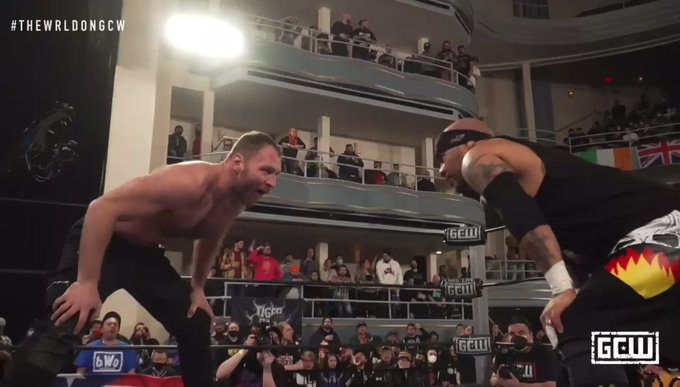