By Barry Holbrook: Tyson Fury gave WBC mandatory challenger Dillian Whyte a warning on Wednesday, telling him that he’s got “3 days left” to sign the contract for their April 23rd fight.

‘The Body Snatcher’ Whyte (28-2, 19 KOs) has until February 19th to sign the contract for his title shot against WBC heavyweight champion Fury.

If Whyte fails to sign for some reason, he’ll be out of the fight and will have missed out on his title shot.

Fury’s promoters Bob Arum and Frank Warren said that he’ll move on if Whyte doesn’t sign the contract for the fight by February 19th.

They believe Whyte, 34, will sign for the fight, but if he doesn’t, Fury will fight someone else on April 23. It’s likely that Arum & Warren already have a backup option for him to face if Whyte doesn’t sign.

Whyte reportedly wants a better deal than the WBC’s 80/20 split for the fight, as he believes he rates a 55/45.

As it stands, Whyte will be getting a guaranteed purse of $7.3 million with the possibility of winning an additional $4 million if he defeats Fury.

That would make Whyte’s purse $11.3 million, which is not bad for a fighter knocked out in five rounds only two fights ago.

“Dillian Whyte, you’ve got three days left,‘ said Tyson Fury on Twitter on Wednesday, letting Whyte know that he has until February 19th to sign the contract for them to fight. Sign the contract.:

“He’s the best in this generation; there’s no doubt about that,” said promoter Frank Warren to The Lowdown in speaking about Tyson Fury.

“The contract has got to be signed by the 19th of February. If for any strange reason he don’t, then he’s out of it,” said Warren about Dillian Whyte.

It would be a shock if Whyte chooses not to sign his contract by the February 19th deadline for the Fury fight, but given how he’s whiffed on other fight opportunities, you can’t rule it out.

Whyte had the opportunity to fight former heavyweight champion Anthony Joshua when he held the belts but chose not to. Also, Whyte recently pulled out of an October fight with Otto Wallin, and he opted not to face Luis Ortiz and Kubrat Pulev in world title eliminators.

If Whyte had agreed to a WBC-ordered title eliminator against Luis Ortiz in 2018, he’d already gotten his title shot a long time ago.

“His boxing IQ is off the charts,” said promoter Bob Arum about Tyson Fury. “Usually, when a boxer is well into his career, he won’t change trainers. If he hasn’t lost, he’s not going to change trainers.

“He had the knowledge to know that he had to change to an Emanuel Steward-type trainer,” Arum said of Fury switching to Kronk Gym-trained SugarHill Steward.

“He had experience in Detroit at the Kronk Gym where he had met Sugarhill Steward, and Sugarhill became his trainer and totally changed his style.

“Frank was talking about what a great boxer he was during the Klitschko days, and he’s really morphed into a tough, tough slugger, who can dodge a punch, gets hit by the punch, but is in there to destroy his opponent,” said Arum.

“He’s an offensive fighter,” said Warren about Fury. “When guys go out like he’s been doing, when they move forward and try and take their guy, that’s when you become vulnerable, that’s when you expose yourself.

“When you’re throwing that big shot, your chin is there; you’re open for the counter. You know what? He doesn’t give as***. He goes out here and knows what he wants to do, and he knows what he’s got to do against a particular opponent. He gets it.

“He knew what he had to do against Deontay Wilder. He’s a good fighter. He knew he had to put him on his back foot, and that’s what he did,” Warren said of Fury.

Whyte is the man in front of Fury

“You can only beat what the best is. He’s the, so he’s the mandatory guy that is in the #1 spot,” said Warren about Dillian Whyte. “The British public knows who he is. So what do I think he is? I’ll tell you after the fight because that’s what you’re going to watch the fight.

“I think in any generation picking out the best in all those eras; you put them all together; who would you back against him?” Warren continued about Fury. “He’s capable, he has the skillset, he had a great chin, the size of him, and he has a great jab.

“He would give anyone a handful. With Tyson, he’s had one fight in two years. 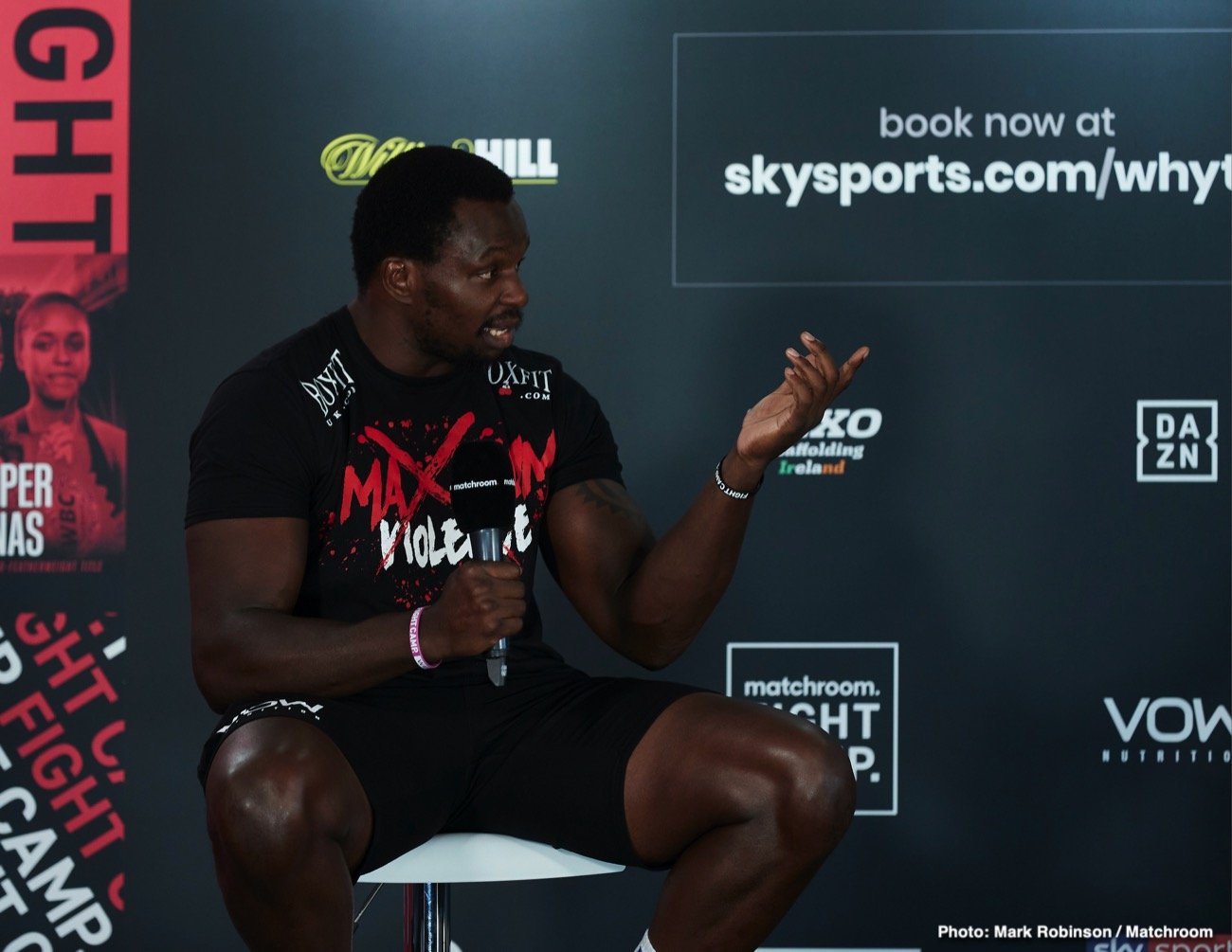 “He doesn’t look like an athlete, but he’s a phenomenal athlete. He’s great fun, and there are no miles on the clock with him. If you look at the amount of fights that he’s had. I think anyone that fights Tyson Fury at the moment are going to have their hands massively full.

“He went to Germany and totally outboxed a boxer, and totally dominated [Wladimir] Klitschko [in 2015]. His approach to fights and what he does in the ring to adapt to what he has to do it’s amazing.

“He goes to the states in the other guys’ [Wilder] backyard, and in the first fight, he got robbed. He should have won that fight. In the second fight, he completely obliterated him.

“In the third fight, for me, was the best live heavyweight fight I’ve ever seen attending live. That tells you all you need to know about him,” Warren continued about Fury. “He’s a warrior; he’s a boxer; he’s an entertainer. He’s got more personality than all these guys.