As noted, it was revealed on Monday that Buck informed officials that afternoon that he was leaving the company. Word going around was that Buck stated how he had achieved his goals of producing main events on the biggest show of the year with the two matches he produced at WrestleMania 38, and now he needed to re-focus his energies on his family, something the current WWE schedule can’t consistently afford him the ability to do.

While Buck’s main job has been a WWE Producer, he’s also done some recent work in the WWE Talent Relations division and was the liaison between the company and indie talents that were booked as extras and enhancement talents at various events. Buck was also scouting new potential signings for WWE and made several appearances as an on-screen official.

In an update, Pat Buck took to Twitter on Monday and issued a statement on his departure, his time with the company, and what’s next. Buck thanked the other WWE Producers, including Hayes, and also thanked WWE Talent Relations head John Laurinaitis. He also gave a special shout-out to Paul Heyman, and the other WWE employees he’s worked with. Buck’s statement reads like this:

“As a producer/agent, I feel that I have accomplished everything I wanted to do within WWE in the last three years.

My endless gratitude beams from working with so many wonderful talents, especially the ultra talented Women’s Division.

To my Producer brothers (and sister): You are the greatest collection of misfits that I’ve ever been with. I already miss my second family. Thank you John Laurinaitis for bringing me into this wonderful group and thank you Freebird for being our foul mouthed general.

And to my fellow New Yawka, Paul Heyman. Thanks for providing a mitzvah and helping this gentile out.

Sending love to the production truck, stage crew, parking, travel, makeup, photo, digital, security, IT, writers, props, social, legal, seamsters, live events, medical, and any other department that I’ve leaned on for something.

I look forward to using my new time to return/expand my training schools/promotions, working all over, and sleeping in my own bed more than twice a week.

To my darling wife, Lauren and baby Harrison. I don’t know how you put up with this gypsy. I [heart emoji] you both. Dada will be home soon.”

“Good luck Pat. You are one of the good guys for sure and you’ll be missed. Take care of my friend and I’ll see you down the road,” Park wrote.

Buck responded, “You’ve made the entire time so hilarious. You’re so good at what you do. I’ll miss the times together in arena and at the bar. You da man!”

Buck, age 38, runs the Create-A-Pro Wrestling Academy in New Jersey and Long Island, along with Brian Myers. He is also the owner of the WrestlePro indie promotion in New Jersey. Buck joined WWE back in 2019 after a lengthy career on the indies as a promoter and wrestler, including a stint in OVW when it was a WWE developmental territory. He was a two-time OVW Southern Tag Team Champion. Buck also had brief stints with Impact Wrestling as a producer and WWE’s FCW as a referee.

Buck was not at last night’s post-WrestleMania RAW as he officially left the company yesterday afternoon.

Stay tuned for more. You can see the related posts below: 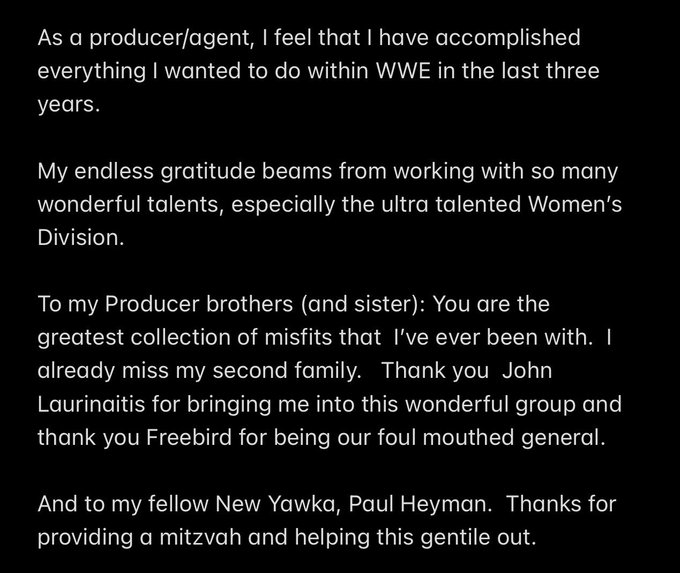 @TheRealAbyss @WWE You’ve made the entire time so hilarious. You’re so good at what you do. I’ll miss the times together in arena and at the bar. You da man!

@ScrapDaddyAP I thought about getting you a mini hair straightener as a goodbye gift.

@CarmellaWWE @WWE You’re the best. Great conversations, fun matches , always a joy to work with. Ty and I’ll miss ya

@Rosenbergradio @WWE Proud to have been a part of your epic title win and defense!

@JamesMCurtin @WWE Spud , feels like we’re always messaging each other when we’re in and out. I think we’re trying to set a record.